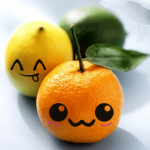 First off, sorry for not coming on the IRC this morning. The internet was acting up a lot, and nothing would really load. Second, to answer your question, I'm not sure who adds who to the chart. I mean, I think Nightfern or Forestpaw does, but I don't know for sure. You can leave Night a message and remind her to add you, if she hasn't by the time I respond to you. --Phillies Phan Red and White 16:32, April 26, 2011 (UTC)

Can you at least role-play one cat in my story allegiances The Silver Feather Allegiances and The Wolf's Heart Allegiances ? The limit is four cats per user!

Rainey! It's Nightfern. I'm so sorry. I'm in South Florida, and if you heard, right now we're going through some bad storms. My internet failed. I'm typing on the iPad, so we can't chat today. I'm so sorry and I don't blame you if you get upset.

Well okay, I will add one more she-cat. I think two cats can't defeat the evil Stonestar anyway. What do you want her name to be the color of her pelt? Featherstream The Sign Of Spring... 05:03, April 30, 2011 (UTC)

Birdsong- Caring, understanding, quiet. When she finds out her sister is expecting a RiverClan tom's kits, she listens and eventually understands, and does not blame her. Good fighter, charming. ThunderClan.

Nightmist- She's a very "mysterious" medicine cat. Sometimes even her apprentice, Mosspaw doesn't understand what she is meowing about.

Riverkit- She's a very thoughtful cat too. Her best friend is her sister, Wolfkit.

Nightmist doesn't get mentioned in the story, but you can asked to be mentioned and I can still give her a minro appearance in the story. Featherstream The Sign Of Spring... 05:48, May 1, 2011 (UTC)

<font color="Rainey- I'll message you, cause I'm gonna go to the movies to go watch Thor with my BFF. ☼ Nightfern ☽ Sun and Moon </font>

Omigod you've been reading?! Actually, I've had some serious trouble with it. I've had a horrible writer's block and I'm struggling to write one measly sentence. ☼ Nightfern ☽ Sun and Moon

Hey, Rainwillow! What exactly do u do on Warriors Share anyway?

And I'm making a quiz thing about what your Clan would be. Is there a way to upload it here? Or I might just put it on a quiz site. Will u take it?

Yeah, but I might have to put it on a quiz site and send u a link. Or something like that, I asked somebody else if u could upload quizzes on here. =D

Oh, and check out this video I made on YouTube:

Oh, I didn't think I had any WWiki pix in there. And which one is Graystripe and which pic is it? I really should've put their names on there because some of the cats I forgot who they were. LOL!

All I know is I seperated the cats by each Clan, just I can't remember who's who. Only a few of them I can remember, and I also had a lot of gray cats! Can u show me what his pic was? And sorry about that.

BTW, can u tell me what all the cats in the video where? I forgot! =D

Hi, I see you read, and left a comment on my page The Elements: Chinese Version (元素： 中文版). Yes, I do speak chinese as well, and if you would like any of your stories translated in chinese then just ask.

I guess I send you the personality of the cat! OK, Tawnypaw is a nice, fun she-cat. She's eager to please her mentor! Tawnypaw loves to know she has a connection with StarClan, because like all medicine cats, she adores them! Silversong123 12:25, July 3, 2011 (UTC)

Here is the map 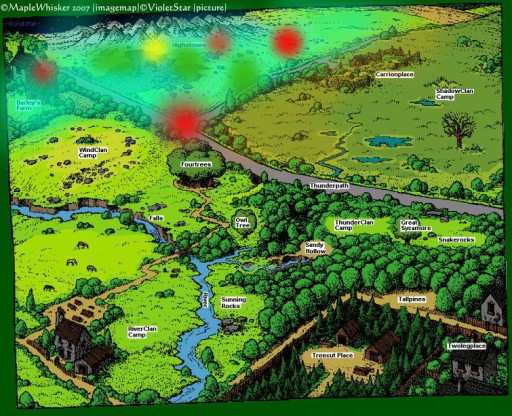 Througout: Nightclan terriory is covered in stone. To save their paw pads from going raw, they place leaves and gras through the harder stone areas of terriotory. it seems treeless, but It is hidden, lush, and smells great (flowers) in newleaf and greenleaf. The camp is hidden near the top of the cave of mothermouth, and sometimes apprentices watch for leaders getting nine lives or medicne cats meeting starclan, and apprentices dare one another to look inside the hole that moon shines in, creating moonstone. Feather300 edits! 07:18, July 10, 2011 (UTC)Feathermoon

Greyfoot is smart and funny. She likes to please her Clan and is one of the top hunters there. She almost always brings an eagle home to feast on. She's that good of a hunter.

Cherrykit is a small runt, but her personality is WAY bigger. She has a kind heart and shows respect towards other cats older than her (If your thinking about changing her just because she's a runt... DON'T)

Mossypelt is arrogant at times, but is truly kind. She is sort of the uptight one in PebbleClan. But, a strong fighter. She isn't afraid to speak out from her heart, just like Silverfrost. KuroshitsujiBlack Butler = Ciel and Sebastian 16:33, July 19, 2011 (UTC)

Dusksky loves to please like all of the RainClan cats. He loves to hunt and go on border patrols. KuroshitsujiBlack Butler = Ciel and Sebastian 17:31, July 27, 2011 (UTC)

Hello. If your getting this message, you are a member of P:I and you are invited to join in the contest that we will be holding in Augest from the 7th to the 20th. Dates may change but that will not affect you what-so-ever. We can assure you you will difinatly have at least a week.

Please use correct blanks and colors based on what you think the charaters look like in your mind when you see the description.

Entering can be found here you can also enter on that page. If you have any other questions or comments, please contact Feathermoon or Cloudskye here or here.

You still on Rainey?

you know how you said i had some spelling mistakes? well, know you get to correct them. because, you are one of my spellcheckers for Warmkit's Adventure. Warmheart 14:13, August 12, 2011 (UTC)

...Ugly, right? well there was nothing esle i could do.XD

Yo Willow. I am nearley dont your picture, I have your mate done, you done, your black and white kit done, and the kit that looks liek you done-- but I forget what the other three kits look like. mine telling me again? 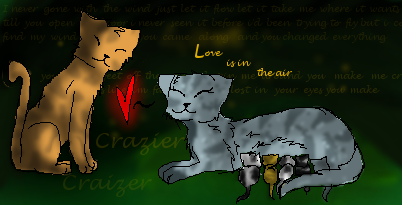 Thats full size too, so you don't need to use thumb-nail.

Oh! and the faint yellow lyrics are Crazier by Taylor swift. I know, I just couldn't thin of other songs at that moment. :3

Hiya!! I love your stories, just saying. I saw how many warriors related wikis you're on and just wondering if you've ever been on Living on our own Wiki? Their stories are really seirious and they need some funny stuff.

damn nvm -feather who is alazy to do her sig

I need a long blurb for One Year Later, so it can be put up on the main page. I need it fast, because I already have a list of wanted titles. 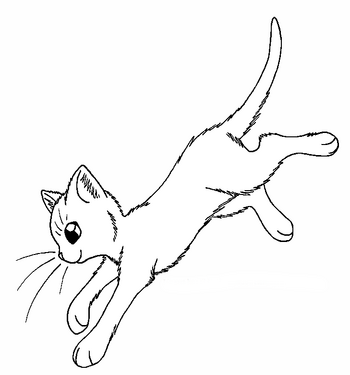 It's not a definite stay, but I'll be here and there. I wrote some on chapter five of Drifting Feathers - Secret Truth. Ottersplash~November chills~ 01:49, November 6, 2011 (UTC)

Adorable fruit is adorable. GraceglowTrust your heart, and you shall survive 15:22, November 6, 2011 (UTC)

THERE IS A VOTE BEING HELD TO DECIDE THE WINNER OF THE SUN-DROWN-PLACE CONTEST. IF YOU HAVEN'T ALREADY VOTED, PLEASE VISIT THIS PAGE TO VOTE.

Hai Dorkwillow. Come back to WW and WSW, plz. It's too quiet without you. =(

WHERE ARE YOU Edit

Retrieved from "https://warriorsshare.fandom.com/wiki/User_talk:Rainwillow?oldid=66036"
Community content is available under CC-BY-SA unless otherwise noted.