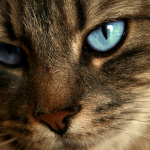 Hi, I'm Ottersplash, but call me Otter. I live in America and I'm a huge fan of warriors. I also like to write stories. I am the author of two series, Twilight and Drifting Feathers. My real-life friend Nightfern introduced me to the Warriors series, by Erin Hunter. The first book I read was Into the Wild. Nightfern also introduced me to WSW (Warriors Share Wiki).

I play Sweetsong in Drifting Feathers - FeatherClan Allinces. Check it out! The limit is 4 cats per user.

Goldenflower is a beautiful tortoiseshell and white she-cat with golden markings shaped like flowers, white paws, a white tipped tail, and light green eyes. She is the daughter of Fernpelt and Lionleaf, an

d the niece of Flamefootand Heatherleaf by her father. Her sisters are Featherfoot and Bravepelt. Her brothers are Leopardfoot and Rainfur. Her mate is Ravenfeather. Her kits are Littlekit (dead), tortoiseshell and white she-kit with pale blue eyes. Rowenclaw, a dark brown tabby tom with green eyes. Adderfang, a light grey tabby tom with piercing yellow eyes. Her apprentice was Misttail. Goldenflower is a proud warrior of ThunderClan.

Sweetsong is a beautiful black she-cat with a white muzzle and blue eyes. Her mother is Willowsong (deseaced) of FeatherClan and an unknown father. (I'm not giving out spoilers!!) Her brother is Riverpool, and her best friend is Frostline. Her apprentice was Talonclaw. Sweetsong is in the middle of a battle, Flamesoul vs. Bramblestripe. They both want her heart. Sweetsong's mentor was originally Silverstar, proud leader of FeatherClan. Sweetsong is one of the most highly respected warriors in the whole forest.

Nightfern - my best friend on the internet and in real life! Plus, she's an ADMIN! But she hates Justin Bieber. {C}RCWriter- He's one of my best friends on this wiki. He's really helpful and friendly!

Hollyfeather (aka Cloudskye) - She's really nice and is an admin!

Midnitesky- My awsome friend on this wonderful wiki. Super nice. It's a privalege to be your friend Midnite!

Dustpelts- New friend! Very fun to talk to! He makes the Outcast Series, which is awsome! The only thing bugging me is...he doesn't like JUSTIN BIEBER!!!!!!!!!!!

Moonwing101- My first apprentice! I don't know about her much, but we're starting to get along.

SnapeFan1- She's my second apprentice! She loves Harry Potter (the series). Her favorite character: Snape. Personally, I like Hermione (I think that's how you spell it)!

FeatherstreamWikia- I don't know a lot about her, but I do know she likes people fanclaning her cats! So go check out her alliances, The Wolf's Heart's Allegiances and The Silver Feather Allegiances!

Leopardclawxx- She's my newest apprentice! I don't know a lot about her, but I'm sure we'll be good friends!

Feathermoon- The newest addition to my friends! Feathermoon is a great story writer (I've read her stories), she asked me to be her friend because I might be comeing back!

Firestar - You wouldn't think twice about not helping a Clan in need!

Sandstorm - You dedicate your time to Firestar! I mean, you're such a devoted mother, mate, and clanmate!

Graystripe - I started to cry when you were taken away from the clans. You left behind a lot of cats, but then you came back!

Whitestorm - Why did you die?! You were so wise...

Snowfur - Why did you chase those ShadowClan warriors off? Bluefur could have done it for you! I still love you.

Bluestar - You were the best leader ThunderClan ever had! You were wise, brave, determined, and....wise!

Yellowfang - You have awsome comebacks!

Cinderpelt - You were one of the best Medicine Cats ThunderClan has ever had! Well, next to Featherwhisker of course!

Thrushpelt - You would have been a good father to Bluefur's kits.

Graypool and Oakheart - Thanks for taking care of Bluefur's kits.

Thistleclaw - If Tigerpaw would of had a different mentor, I bet 1000 mice he would have been nicer.

Ferncloud - You think your only purpose in lif is to have kits, kits, and more kits!

Crowfeather - How many more mates are you going to have?

Nightcloud - I guess your OK.

Mothwing - How can you not believe in our warrior ancestors?

Socks and Ruby - Tsk-tsk-tsk, Tiny was your only other brother. He looked up to you.

Video:Ashfur's Hurt
Video:Take It Like A She-cat
Video:Cow Of The Wild Episode Twenty Part One
There is a series to this. This is epi. 20
Video:TigerClan On Love
LOL! THIS ONE IS FUNNY!!!!!!!!
Add a photo to this gallery

Retrieved from "https://warriorsshare.fandom.com/wiki/User:Ottersplash?oldid=65460"
Community content is available under CC-BY-SA unless otherwise noted.