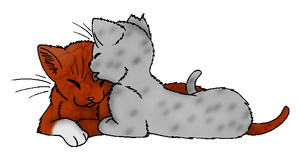 Squirrelflight was with Brambleclaw, a brave, handsome ThunderClan warrior. Ashfur was in love with Squirrelflight, an individual who thought he had no chance but never gave up hope. As much as he loved the fiery warrior, he would never do anything to break her and Brambleclaw up. He was about to give up when he heard something quite.... interesting.

"Why don't you have any trust in me?" Ashfur heard the deep growl of Brambleclaw's voice.

"What's wrong with him, he is my half-brother"

"He's from an enemy clan, you mouse-brain!"

"You have no problem with Tawnypelt!"

"That's because we went on the great journey with her, and we can trust her."

"I know there's something bad in Hawkfrost! Don't you know who his father is?"

"Yes his father Tigerstar, my father" the muscular dark brown tabby padded away from the ginger she-cat, his eyes glowing with anger.

This was his chance to hit it off with Squirrelflight. He smiled twitching with anticipation.

"You saw that?"She spoke in a somber tone. Her fiery personality drowned with sadness. "Yeah I'm okay, but I complety screwed up with Brambleclaw. I don't think i can fix this..."

"Well if Brambleclaw doesn't see what he's missing then he doesn't deserve you" Ashfur spoke with sensitivity and understanding. These were almost the exact same words his sister Ferncloud had said to him.

"Thanks Ashfur" Her green gaze with filled with affection. The next thing he knew, Squirrelflight's and his tails were entwined. A thought rang in his head.

Maybe now she can be my mate instead of Brambleclaw's! He almost leaped with joy at the thought but he didn't want to make a fool of himself. He gave Squirrelflight a loving look and then spoke.

"I should probably grab some sleep," He yawned. "I did the moonhigh patrol and then went hunting."

"Sweet dreams, Ashfur" Her voice flowed smooth like the river on a sunny newleaf day. Ashfur headed into the warriors den and drifted into peaceful sleep. The dreams that flooded into his head were all amazing.

One was of Squirrelflight, in the nursery. She was nursing four kits; one ginger like her, 2 were pale gray and flecked like him and his sister and the other one was a pretty tabby like his mother. She looked at him and smiled. "Look at your kits, Ashfur" She meowed, "Aren't they beautiful?" Ashfur nodded.

A paw prodded him awake. It was Squirrelflight. She had no milk scent, no kits around her. The dream had felt so real. Still, Ashfur felt like that would be his future, living the rest of his life with Squirrelflight. He didn't care if they never had kits.

"Wanna go hunting? Or just take a walk?" Her emerald eyes had that fiery spark once more.

"A walk would be nice and if we get hungry we can hunt." Ashfur purred as Squirrelflight wrapped her fluffy ginger tail around his.

They headed out into the trees, the cool breeze ruffling his fur. The leaves in the trees rustling energetically. His sights interrupted as Squirrelflight pounced on him.

"Hey!" He meowed. He batted at her ear playfully. "I was thinking."

"And so was I," She retorted. "thinking of ways to snap you out of your trance, and I'm pretty sure that did the trick!"

They soon got into a playfight, having fun. Squirrelflight was energetic but her sharp tongue and tendency to act before thinking could get her into a lot of trouble. That moment, Ashfur vowed to protect her and never let anything hurt. Not even Brambleclaw, especially not Brambleclaw.

"Sure, we should bring some back for the clan too." She stretched and started to sniff the air. Like her mother, Sandstorm, Squirrelflight was one of the best hunters in ThunderClan.

They went out into the forest happily. They did hunt but also had some more fun. "Come on, Ashfur. Let's get this prey back before the others start wondering where we are!"

"Okay, that's a good idea!" He purred. I wish every day was as perfect as this one! He thought to himself. He grabbed his sparrow and shrew while Squirrelflight grabbed her rabbit and mice.

She looked at him and smiled. "Can I trust you with something?" She asked, her tail on his shoulder.

"What?" He asked sympathetically. He could tell this was something serious that was bugging the ginger she-cat's mind. "You can tell me anything..."

"Well," She started to say, tears welling up in her eyes. "I went to Leafpool's den after me and Brambleclaw were mates and I was talking to her about how cute the kits would be and she said... She said... She said I might not be able to have kits at all!" At this point she let out a yowl of grief.

Squirrelflight wasn't able to have kits. Ashfur didn't care though, as long as his mate was okay with him. "It's okay" He purred while licking her ear. "I will still love you until the ends of time."

Retrieved from "https://warriorsshare.fandom.com/wiki/Love_and_War:_The_AshXSquirrel_Saga?oldid=69419"
Community content is available under CC-BY-SA unless otherwise noted.