Leopardclaw is a sandy coloured bengal cat with deep amber eyes. She is the main character in The Rise Series and a major part in The Next Generation Series.

Amber Eyes in the Dark[]

The first time she visits the Moonpool, she is given a prophecy: "Clouds and Claws will come, and the ancient laws will sleep at peace once more". During her training, the old WindClan medicine cat, Hawkheart comes to her as a vision of a lost cat that has been injured. He is testing her to see how well she copes. He also gives her a minor prophecy relating to her prophecy: "Beware of your choices Leopardpaw! They shall have effect in years to come". She realises that this means she is not destined to be a medicine cat. Just after this, it is revealed that Ashfoot has been killed by ThunderClan over a border fight. Webfoot is announced as the new deputy.

At the next gathering, Onestar, who has gone mad, accuses Barkface of trying to turn the Clan against StarClan. He attacks Barkface, and nearly kills him. StarClan strip his lives from him. Leopardpaw talks to Barkface in his last moments, and then he dies. Then, at the next Moonpool meeting, Cinderpelt gives Leopardpaw her full name, Leopardclaw, and Webfoot is given his leader's name, Webstar. In a dream, Tallstar tells Leopardclaw that it is her destiny to be a warrior, rather than a Medicine Cat. Leopardclaw then takes Bravekit as her apprentice.

There is a battle against ThunderClan, to regain the territory they stole. Leopardclaw and Bravepaw go with Webstar and his deputy Eagletalon to talk to Firestar. Firestar refuses to listen, and WindClan launch an attack. Cinderpelt introduces the WindClan Medicine Cats to her new apprentice, Jaypaw. The Medicine Cat's then set out for home with the knowledge that the battle is won. Leopardclaw announces the win to the Clan, and they cheer. Eagletalon then brings Lavenderwish's body into camp, Leopardclaw tries to save her, but she dies. Lavenderwish tells Leopardclaw that StarClan have revealed that she is the claws in the prophecy.

Leopardclaw gives Bravepaw his Medicine cat name, Bravesoul, and then she dreams. In her dream, Tallstar, Lavenderwish and Barkface come to her. Leopardclaw asks about Onestar, and she is told that he is in the Dark Forest. The three cats then tell her "The Three have come together, but only you can save WindClan." This relates to the three in ThunderClan. They then remind her of her prophecy. When she returns home, she is made an apprentice, and her mentor is Pearlwhisker.

The Steps of a Warrior[]

Leopardclaw is then made a full warrior, a few moons after Featherflame and Thunderstrike. She then goes on a border patrol with her father, Crowfeather and Thunderstrike. They meet ThunderClan who are trespassing over border. They get into a border fight, and Leopardclaw takes on a fairly young tom. She accidentally wound him badly, before collapsing herself.

She is kept in the medicine den whilst in a state of delerium. Near the end of her recovery, she lashes out at Bravesoul during a fit, scarring him quite badly. She feels very bad after this, but he insists that he does not mind, and comments of how his siblings will be jealous that he has a bigger scar than them. Webstar then announces the cats that will go to the gathering; Leopardclaw is not included. She asks Webstar is she can go, and then feels embarrassed; Webstar dismisses the fact that she asked, and allows her to join them.

They set of for the gathering the next evening. Leopardclaw observes all the cats who head for the island, noting that Nightcloud is pregnant and that Bravesoul's siblings do indeed seem awed that he has a large scar. As the gathering gets underway, a young ThunderClan tom greets Leopardclaw. She notes that he is Firestar's son, and wonders why he is talking to her, before she realises that he is the cat that she scarred at the border battle. She apologises, and he brushes it off. She turns to leave, but the cat, naming himself Cross-scar stops her; telling her that his name was going to be Blazeheart, but he chose Cross-scar. They talk some more about scars, and their dreams for the future before saying goodbye, wishing to see each other again.

One of the following nights, Leopardclaw is visited by StarClan, who have a message for her: The Clouds are coming! This is a part of her prophecy.

The Tail of a Friend[]

Leopardclaw is out on patrol.

Strangers in the Shadows[]

Allegiance of the Ancients[]

Night of the Golden Moon[]

The Next Generation Series[]

Spottedfeather (Living as of Loner Road)

Webstar (Living as of Loner Road)

Crowfeather (Living, as of Loner Road) 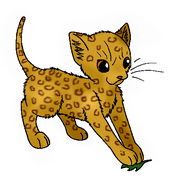 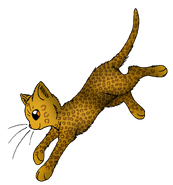