Hollyfeather is a dark brown and black she-cat with a long tail and blue eyes.

Hollypaw does not actually appear in Chapter One, but, she is in Brackenheart's belly, ready to be born.

Chapter Two is where Hollypaw first appears, but she is a kit, Hollykit. She is first shown with Valorkit, son of Mosswhisker and Firewind. He is her best friend, and as noted by Mosswhisker, the two follow each other around.\

Hollykit is now an apprentice, Hollypaw, and she and Valorkit, now a warrior named Valorsong, are at a gathering. All seemed to be going well, until the world around her "froze" and a golden tom appeared in front of her. She seems shocked at first, but the tom, who she learns, that his name is Lionblaze, provides a sense of comfort for the she-cat, and now she starts to learn of the prophecy that centers around her.

Hollypaw learns more of the prophecy that surrounds her. She realizes how important Valorsong is to her, and finally admits to herself how she feels. She becomes more trusting of Lionblaze, due to the fact that he seems to want nothing but to help her.

Hollypaw does not appear in this chapter, but is mentioned by Firesoul as the "cat who will save us all".

Hollyfeather appears, only briefly, at the end of this chapter. She is one of the cats who chases away Kris, along with Valorsong and Snowstar.

Brackenheart (Alive as of Secret)

Snowstar (Alive as of Secret) 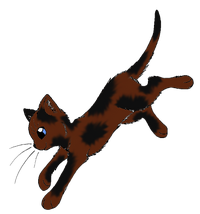 Retrieved from "https://warriorsshare.fandom.com/wiki/Hollyfeather_(SC)?oldid=60540"
Community content is available under CC-BY-SA unless otherwise noted.