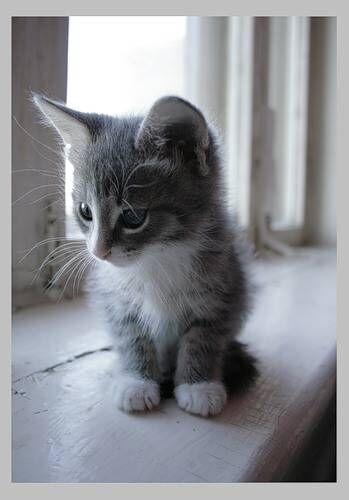 Willowfeather stared around camp for Eaglestar. She couldn't wait to tell him. It had been 4 moons since the journey to the moonstone.

Eaglestar ran up and gave her a lick to the ear.

"Hey, can I tell you something?"

"Not now I have to be somewhere."

He froze and looked back, "Kits? That's wonderful!" He smiled.

She smirked and nodded. She began to think about her mother, she never got to know her because she died having her and her brother and sister. She padded into Foxpelt and Vixenpaw's den.

Foxpelt smiled as she entered, "Hello Willowfeather! What brings you here?"

It began to storm violently. Every cat went into their den but her and Lilywhisker. She padded into the nursery but Lilywhisker blocked her. "You stole everything from me." She murmered angrilly.

Willowfeather looked at her sister in shock, "What did I steal from you?!"

She smirked, "Everything!" She ran over and clawed her shoulder angrilly.

She paused at the sight. She bit her paw causing Lilywhisker to yowl in pain, she then clawed her throat, killing her sister. She paused and ran into the nursery. "What did I do..." I just killed my excuse of a sister!

Eaglestar padded out of his den to see his previous mate dead. "Lilywhisker!"

Vixenpaw scrambled out after, "Mama!" She crouched next to her.

Willowfeather watched the crowd go up to her dead sister. "You did the right thing" A voice murmered into her ear, she turned around to see a black tom staring at her.

"You did though. My name is Blackstar, leader of the Dark Forest. We would like to invite you to join us, Willowfeather."

Willowfeather stared into the black tom's eyes. "Why?"

"Because you're exactly what the Dark Forest needs." A tom meowed running up.

She stared at the two cats. "Fine, i'll join, but, I want a new name, I hate the name Willowfeather."

"Fine, you will be known as Wildstrike." Blackstar decided.

A swift white tom with a scratch along his throat ran up, "I'm Tornthroat." He flicked his tail to the three fighting cats around a tree stump, "Those are my kits. Buzzardwing, Morningblaze, and Stormspirit." He then pointed to a cat sleeping in a tree, "And that's my mate, Meadowleaf."

Wildstrike turned to look at Meadowleaf, she was expecting kits. Was this to be her home? The Dark Forest? Or was it SharpClan? Her mind whirled around her, she was torn.

Blackstar leaped onto a large black rock. "All cats of the Dark Forest gather under the Darkrock for a Dark Forest meeting!" He yowled triumphantly.

She turned to look at him and immediately sat down.

"Yes you." He flicked his paw trying to force her to come forward.

She sighed and touched noses with Shiningpaw. The little she-cat was so sweet, she didn't like the fact that she had to make her become evil but that wasn't her problem, it was Blackstar's.

Thanks to User:Graceglow for helping me do the ending scene of Chapter 3. Vixenpaw closed her eyes, she was dreaming with StarClan. She opened her eyes when she heard a rustle. She got up and noticed it was just Troutpaw. She was at the medicine cat meeting.

Troutpaw smiled and nuzzled her friend. They were from two different clans, SharpClan and NettleClan. "You ok?"

She nodded, trying not to disturb anyone she mewed a "Yeah." and went back to sleep.

Wildstrike ran over to Tornthroat, she had to speak to him. "Tornthroat...why don't you stay away from Meadowleaf for a while. Maybe you should go hunting?"

He turned to look at her, fury in his eyes, "I can't just leave her!"

She snarled at the tom.

Meadowleaf got up to look at the two, "Stop! Both of you! Tornthroat, you may as well go hunting."

He rolled his eyes and nodded.

After the hunting patrol...

The eerie silence of the Dark Forest was disturbed by an ear-splitting yowl of shock and pain. Wildstrike was frozen in terror. "The kits!" shrieked Meadowleaf. "They're coming!"

Meadowleaf lay there, 3 of her kits born and feeding, and one left. She tried to give it life as her own faded, and as it was born, her tongue worked, licking the kit so it would live. Her being disappeared, and her 4 kits were left to do the living for her.

"No! Meadowleaf! Don't leave me! Please!!!!!" Tornthroat yowled, he growled at his kits, he stared at the 4th. "You don't deserve to live." He threw it into the dirt and buried it.

"Don't kill it!" Flowerstem dug the kit out, it wasn't dead yet. The kit coughed up sand. "I'll keep you safe..." She licked the kits head.

Wildstrike crept her way out of the nursery. She was back in SharpClan for the day.

She sighed, she may be his mate but she still didn't love him, "Hi."

She rolled her eyes and padded away. She turned back, "And by the way, it's Wildstrike now."

He stared at her as she padded off, "What a she-cat..." He mumbled as he started to day dream.

Blackstar appeared in front of her, "Time for the Dark Forest."

She nodded and touched her paw on his shoulder and they flashed there.

Shiningpaw ran up to her mentor, "What are we going to learn how to do today Wildstrike?!"

"Er, Blackstar? How do you train apprentices in the dark forest."

He looked at her, "How can you not know already? Haven't you asked? Well, you train them to be evil, remember."

Wildstrike nodded, "Er..yes." She padded off to the Black River so she could train with Shiningpaw.

Vixenpaw padded out of her den and noticed Troutpaw running over.

"Vixenpaw! Vixenpaw!" She yowled as she scrambled towards her, "Vixenpaw...I need your help with something."

"What would that be?"

She looked at her, "Well...my clan is having some trouble...my mentor is having trouble curing all the cats. It's a greencough breakout. I need your help to cure them. We're running out of herbs....i'm afraid everyone will die. So i'm asking you to please come to my clan and help me cure them. My mentor has greencough now, too. I'm the only one without greencough. I need your help, Vixenpaw. If you don't come...well, everyone will die. I can't cure them by myself."

Vixenpaw sighed, "This is a big task, I can help. But I need Foxpelt to come with me."

"Oh thank you so much! You're the best!"

Retrieved from "https://warriorsshare.fandom.com/wiki/Hawk%27s_Recovered_Wing?oldid=37706"
Community content is available under CC-BY-SA unless otherwise noted.