Cross-scar is a flame coloured tom, much alike his father, Firestar. He has a large, cross-shaped scar across his face, which he was given in a battle over the border by Leopardclaw.

The Steps of a Warrior[]

He is first seen on the border, with a group of other ThunderClan cats. They are challenges, and when they refuse to go away, they are fought off. Blazepaw battles Leopardclaw, who attacks him viciously, and then gives him a huge wound, which would later turn into his scar. ThunderClan retreat, and Leopardclaw blacks out.

He is seen for the final time in this book when he is meeting with Leopardclaw at the border. The relationship seems to have been going on for a long time. They meet, but then discover that Bravesoul, the WindClan medicine cat, knew that they were meeting. He tries to encourage them to break up, but then leaves them alone after he is asked to go away.

Leopardclaw then tells Cross-scar that Bravesoul is right, and they should not be meeting. Cross-scar relutcantly agrees, and this is then the final time they meet. They say goodbye, and then leave for their own Clans.

The Tail of a Friend[]

Cross-scar is only seen briefly. When Leopardclaw passes the ThunderClan border with Cloudpaw, she is explaing the rule about the borders. Cross-scar jusps out from some bushes, and then he explains to Cloudpaw some of the warrior code, the part about friendships in other Clans. He then runs off, after dipping his head to Leopardclaw.

Allegiance of the Ancients[]

Firestar (Living as of Loner Road) 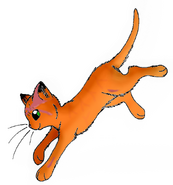